Doctoral thesis being done by the geologist, Iranzu Laura Guede on diet and mobility in medieval times in the north of the Iberian Peninsula.

We reproduced in our private web article on investigations of Islamic necropolis of Tauste of the magazine Campusa that  “is the electronic communication of the UPV / EHU, which accounts from a journalistic point of view, today and university activities which it serves to promote internal communication, to promote knowledge and approach of different sensitivities and sectors of the university community, and thus becomes a showcase for the dissemination of what we are and do, with special emphasis on research “ . 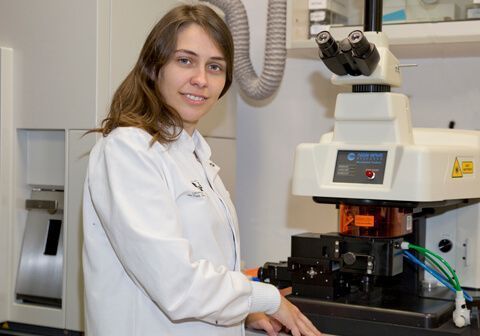 Diet and mobility are recorded in our bones and our teeth

The work, conducted by a research group of the UPV / EHU analyzed the diet of Muslim individuals found at a site in Tauste (Zaragoza) and determines the differences in food by sex and age. This work is part of the doctoral thesis being done by the geologist, Iranzu Laura Guede on diet and mobility in medieval times in the north of the Iberian Peninsula.

This research applies own geology techniques to respond to the uncertainties arising in other disciplines such as archeology or anthropology archaeological site Taussig (Zaragoza).

Excavations carried out in this municipality unearthed the skeletons of 44 Muslim individuals who lived between the eighth and tenth centuries From that discovery a research group of the Department of Mineralogy and Petrology Geology section of the UPV / EHU has been commissioned dental analyzing samples of these human remains to establish the diet of this medieval Islamic community.

The Guede research has used the technique of laser ablation for specific analysis in the teeth. One of the features of this technique is that the sample does not need a lot of preparation and, moreover, is very aggressive with fossil remains. Therefore, allows the preservation of these remains, which are limited in archeology, preserving them for future studies.

Chemical results have revealed the existence of significant differences in feeding adult men with regard to women and youth. It has been found that adult males had a higher intake of animal protein than women and youth, who had a diet rich in legumes and vegetables.

Analyzes by this group of researchers have to anchor in studies of historians, anthropologists and archaeologists themselves. “The numerical data by themselves do not indicate anything, but are essential to support the assumptions and archaeological and historical discoveries” emphasizes Dr. Zuluaga, a director of the doctoral thesis of Guede.

Therefore, although “we can not know exactly the source of animal protein by these analyzes, based on written texts and anthropological knowledge of medieval Muslim society presumably it would come, especially goats and sheep.”

In that sense, this type of study is proof that “we are what we eat” as pointed Samuel Epstein (1951), famous geologist for developing methods of stable isotope analysis. “What we eat becomes part of our bodies and gives us valuable information that is recorded in us and we” here on teeth.

The study focused on the dentin as it is, according to geologist Iranzu Guede, “most appropriate” that the tooth enamel to establish the diet; “The chemical composition of the dentin remodels the lifetime and therefore are recorded elements that were part of our diet during the last years of the life of people”.

Besides regard to food, this research has also made other interesting findings such as high concentrations of lead in the dentin of four individuals. “The lead concentration is so high that suggests that they were intoxicated by that element” underlines this young researcher.

The origin of this element is anthropogenic and according to various studies may be due to the work performed by manipulating lead minerals, possibly in the development of glazes for ceramics.

Among the highlights individuals found a woman who was buried with an earring. “This is really curious as Muslims never buried anyone with jewelry or other items belonging to his life,” explains Iranzu Guede. According mobility studies being carried out by the PhD student, “has been shown that this woman was born in the village of Tauste, he lived outside the long time and then returned a few years before his death, but always desconoceremos reasons your trip”.

These studies also have demonstrated that the Muslim community was a stable community since most people were born and died in Tauste except two men and two foreign women.

This site was found as a result of a work carried out on public roads of the town and later the “El Patiaz” Cultural Association made several interventions between 2010 and 2013. The excavations were conducted under the supervision of archaeologist Francisco Javier Gutierrez, who believes that two hectares can occupy this necropolis could have up to 4,500 tombs. The anthropological study of human remains found, meanwhile, has made the anthropologist Miriam Pina.

In addition, analysis of carbon 14 states that this population dates from between the eighth and tenth centuries in a turbulent period after the conquest of Muslims. In fact, this research has been instrumental in finding the Muslim presence in a population in which its existence was unknown.

Guede Iranzu study is part of his doctoral thesis, directed by Dr. Maria Cruz Zuluaga and Luis Angel Ortega, who analyzes mobility and diet in different populations of the Middle Ages in the north of the Iberian Peninsula.