Ever since the El Patiaz Cultural Association started the excavations in October 2010, six hundred sixty-six tombs had been exhumed during the subsequent digs.

With the help of previously collected oral information about the locations where the burials were being found over the past decades, a plan was devised. It comprised an area of 2.5 Ha for this necropolis. Having applied the density of burials found so far it is estimated that there could be around 4,500 tombs. 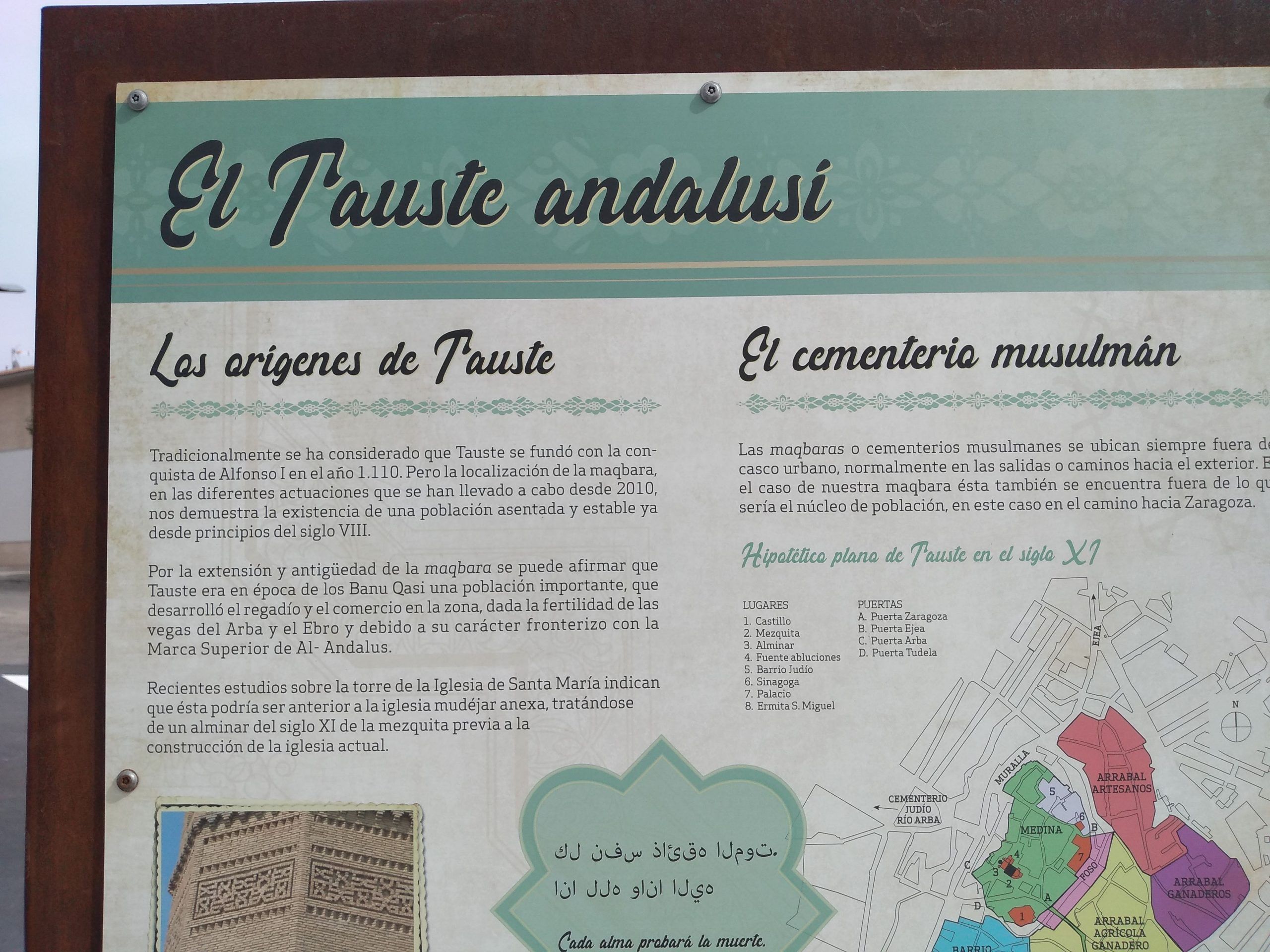 The first archaeological trial excavation conducted in October 2010 and promoted by the El Patiaz Cultural Association immediately confirmed the initial theories. These were the actual remains of the gravesite made following the Islamic burial rituals: the bodies were placed on their right side, facing the Mecca.

Carbon-14 dating tests determined that this cemetery had been there for four centuries of the Islamic rule over these lands. That is, starting from the early years when Muslims arrived in the Ebro valley in 714 until the beginning of the 12th century when they became part of the Kingdom of Aragon. 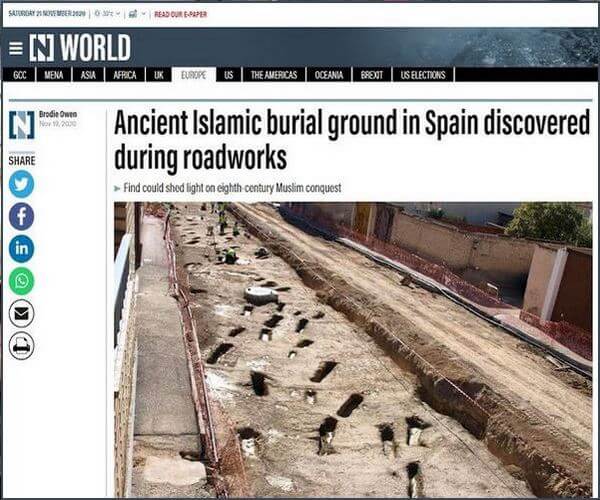 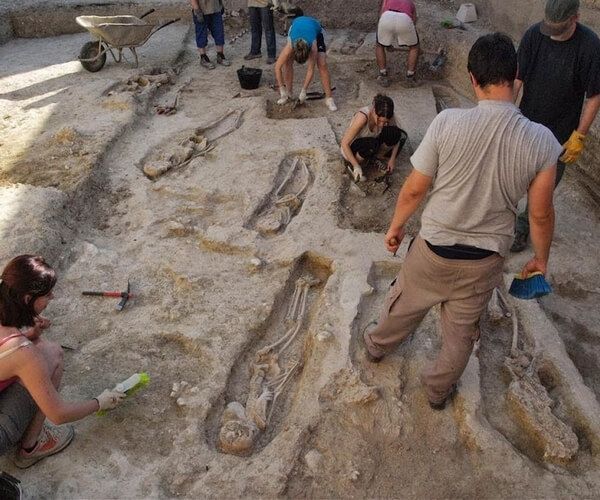 Work field was promoted by the “El Patiaz”  in 2013. Twenty-two university students of various degrees and departments from different parts of Spain met in Tauste to do practical work of their degrees on the site of the local Islamic Necropolis. 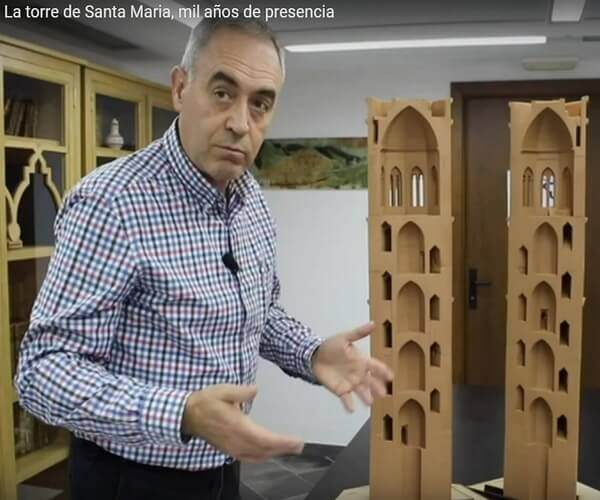 The true origin of the discovery of the Islamic necropolis in Tauste. Research work on the architecture of the tower of Santa María was conducted by a multi-disciplinary team challenging conventional historiography.

One of the most significant pieces of information the necropolis provides us with is the extension area a town in those times proved to have occupied, under the premise that its suburbs had to extend up to that burial site. Having applied the average density numbers calculated for an Al-Andalus town of that period, the population of the medina (historic city centre) and suburbs is estimated to have been approximately 3,000 inhabitants.

The studies about the tower of Santa María de Tauste conducted in 2008 from the architectural standpoint brought to light that it was not a Mudejar style tower built in the 13th century as it had been considered until then, but a minaret existing in the same period as the Aljafería Palace in Zaragoza. That, in turn, meant that it had to be a part of a mosque big enough for that tower and, therefore, a larger population. This assumption went against the traditional historic version, according to which Tauste used to have hardly any population before the arrival of Alfonso I The Warrior.

Being confident that these conclusions were right, we kept looking for people who were not supposed to have existed. Or reasoning was: a large population must have had a big cemetery. This way, architectonic studies have led to the urban ones, searching for the traces of the urban planning of that city in the streets of present-day Tauste.

Unlike Christians that up to the 19th century were burying their dead ones in the churches or their vicinities, Muslims would set up their cemeteries or maqbaras out of the urban area right next to the city wall near the main road that led to that city. It was a tradition dating back to Roman times supported by the belief that the ancestors buried there might protect the population from the possible upcoming evil (illnesses, enemy invasions, etc.).

Taking this into consideration, the most likely place for a maqbara would be in the Southern tip of the city where the road to Zaragoza was. This theory coincided with the fact that human remains kept appearing in that area for decades every time there were excavations for building foundations or networks of sanitary drains. These finds were usually explained by a devastating cholera epidemic that took place in Tauste in 1885. People said the mortality rate back then was so high that there was no time to bury the dead properly, and so the mass graves had to be improvised. But what if these remains were not from the 19th century but instead belonged to the Muslim population that we had been looking for?

The first trial excavation was conducted in 2010 promoted by the El Patiaz Cultural Association. It immediately confirmed our theory: the remains found were undoubtedly buried following the Islamic rituals: the bodies were positioned on their right side facing Mecca. Carbon-14 dating tests determined that this cemetery had existed for four centuries of the Muslim rule over these territories, that is, from the early age (Muslims arrived in the Ebro valley in 714) until the beginning of the 12th century when the territory became part of the Kingdom of Aragon.

The most significant find was the oldest Islamic tomb on the Iberian Peninsula (discovered along with a couple of others in the Castilla Square in Pamplona), whose age was determined by the carbon-14 method. It was particularly surprising to find such tomb along with other architectonic heritage of that period in the Northern part of Spain. As yet, such examples were only known to be found in Cordoba, Seville, Granada and a couple of other places in Spain.

Using the information gathered from oral recollections of the local inhabitants regarding the places where the burial sites were being found over the past decades, a plan was drawn up. In it, one could see that this maqbara (cemetery) covered at least 2 Ha, which, applying the density of the discovered burial sites, would hold 4,500 tombs of adults, plus those of children placed in between. Further finds and information make us believe that it could cover an area of 3 Ha.

The archaeological discovery turned out to be one the most important ones made in Aragon lately, since it seems to debunk the historical consideration not only of Tauste but also of the large area known as the Upper March of Al-Andalus (Ath-Thagr al-‘Alà), that is, the Ebro valley. We can safely argue now that the place used to have high population density and bear a significant cultural legacy that until now had been camouflaged and mistakenly referred to as “Mudejar”.

To protect this findspot, the government of Aragon catalogued the area of around 4 Ha. Subsequent trial excavations, also promoted by the EL Patiaz Cultural Association, confirmed everything discovered until then. Finally, this excavation was conducted during the urban infrastructure works on Obispo Conget Avenue.